SMS vs. Apps: Which Makes the Most Sense for Your Business? 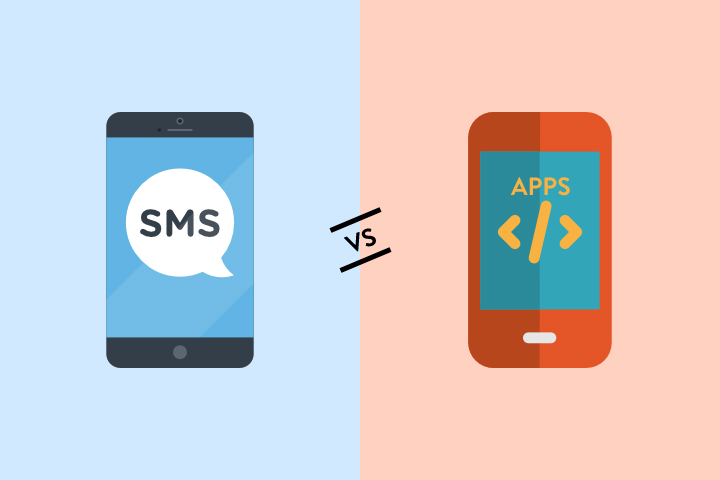 Any serious business obviously needs a mobile strategy these days. But the tricky part for many firms is choosing which mediums to use.

Between PPC advertising, email, mobile apps, and SMS, it can be a challenge to decide what to concentrate on. It’s especially difficult when you compare SMS and mobile apps head-to-head.

The Need for a Balanced Mobile Strategy

When it comes to developing a well-defined mobile engagement strategy, the word “balance” is vital. In order to be successful, you pretty much have to turn to a variety of mediums and resources.

As they say, “different strokes for different folks.” People are different and you can’t target everyone with the same approach … even if you’re working with a well-defined group of customers. Today’s consumers rely on many modes of communication and it’s worthwhile for brands to respect this.

Some of the various ways in which marketers engage customers include social media, SEO, PPC advertisements, email, SMS, and mobile apps. And though all of these can play a significant role in mobile engagement, the last two are particularly essential in 2016.

We appear to have reached a turning point where businesses are being forced to evaluate whether they want to keep using mobile apps or switch to SMS. The choice is obviously yours, but a growing body of research and the general trends suggest that one is substantially better than the other.

The Problem with Mobile Apps

Virtually everyone has a smartphone these days, which theoretically means that investing in the development of a mobile app is a good idea. However, the problem is that mobile apps aren’t as effective as some of the studies and statistics have led us to believe.

When you dig seriously into the numbers, it becomes clear that the vast majority of mobile apps don’t render a high return. Consider the following data points gathered by Greg Hickman of Mobile Marketing Engine.

Major apps like Facebook and YouTube take up 70 percent of the average user’s time, but maybe you could find your way into the other 30 percent? Unfortunately, that’s probably wishful thinking.

Most apps downloaded today are not for business purposes. Users prefer to download entertainment, social media, and gaming apps instead. It’s rare that a business app secures valuable space on a user’s smartphone or mobile device.

We don’t want to discount mobile apps altogether, though. If for some reason you can develop an app that’s actually downloaded and used by your customers, there are some inherent advantages associated with the push notifications they produce.

“Many consider push notifications to be a less intrusive marketing tactic than text messaging, since messages can be delivered without interrupting the user in their current activity, and never incur an additional cost,” marketing expert Sean Gera says.

The Key Advantages of SMS

Mobile apps had their place in the sun a few years back, but we’ve currently reached the point of market saturation and smartphone users are moving in a different direction. Apps feel clunky and outdated, for the most part; so customers are migrating toward superior methods of mobile engagement. One is SMS.

SMS actually preceded mobile apps, but it’s a much more flexible solution. As such, it’s aged much better than apps have.

Clearly, SMS has immense value for brands that are willing to make the investment. It’s a superior form of mobile engagement that is available to everyone with a mobile phone and offers high returns to brands that develop clever strategies.

OpenMarket: The Obvious Choice for SMS

There’s something to be said for developing a balanced mobile engagement strategy, but at some point you have to acknowledge when one mobile channel has become vastly superior to another. At this point, SMS is far more effective than mobile apps and push notifications for business-to-consumer notifications.

At OpenMarket, we make it easy to get started with SMS. Our SMS solution is utilized by some of the world’s leading brands, and we work hard to ensure each customer receives a high level of customer service.

If you’re interested in learning more about our SMS solutions and the role they play in mobile communications, please don’t hesitate to contact us today. We would love to help you gain a better understanding of how OpenMarket might fit your business.