Is RCS Poised To Overtake SMS For Text Messaging Supremacy?

At the rate of speed technology is changing how we interact, no CMO can think that any platform in use now may be the first choice of their target audience in the near future. Case in point is SMS. It’s part of daily life and become such an ingrained way to communicate to the point that most marketing strategies include SMS campaigns.

However, there is an up-in-coming communication platform set to change our focus: Rich Communication Services (RCS). As Digital Trends wrote last year “formed by a group of industry promoters in 2007 and brought under the wings of the GSM Association in 2008, it envisions a platform that’s significantly more rich and capable than today’s SMS.”

Labeled as text messaging 2.0, Google featured it at Mobile World Congress 2017. RCS is poised to become a reality which both consumers and brands can reap the rewards. In terms of carriers and their use of RCS according to Fierce Wireless “T-Mobile, AT&T and Sprint have all reported progress to one degree or another on the rollout of RCS” while Verizon “appears to be the only major wireless network operator in the United States that is not supporting (RCS).

Mobile Vs. RCS By the Numbers

In 2012, there were 6 trillion text messages sent globally. With Q1 2017 showing 107 million new mobile subscriptions to total 7.6 billion worldwide, the new predictions indicate that there will be 9 billion by 2022.

However, RCS is catching on fast, according to an OpenMarket research report. The report found that “nearly 80% of consumers find RCS appealing and 74% say RCS would make them more likely to want to communicate with a brand.” Other statistics show the growth potential of RCS. The report stated that, “as of January 2018, there were 159 million monthly active RCS users around the globe, served by 50 mobile operators.

RCS is gaining in popularity for two key reasons. The same research report found that over two-thirds of consumers would prefer what RCS offers over SMS in terms of what is offered and how the information is presented. This includes the fact that they like to see company branding within the RCS message and the identification of who sent them the message. Besides these benefits, consumers also like the simplicity, personalization, and reliability that RCS offers. 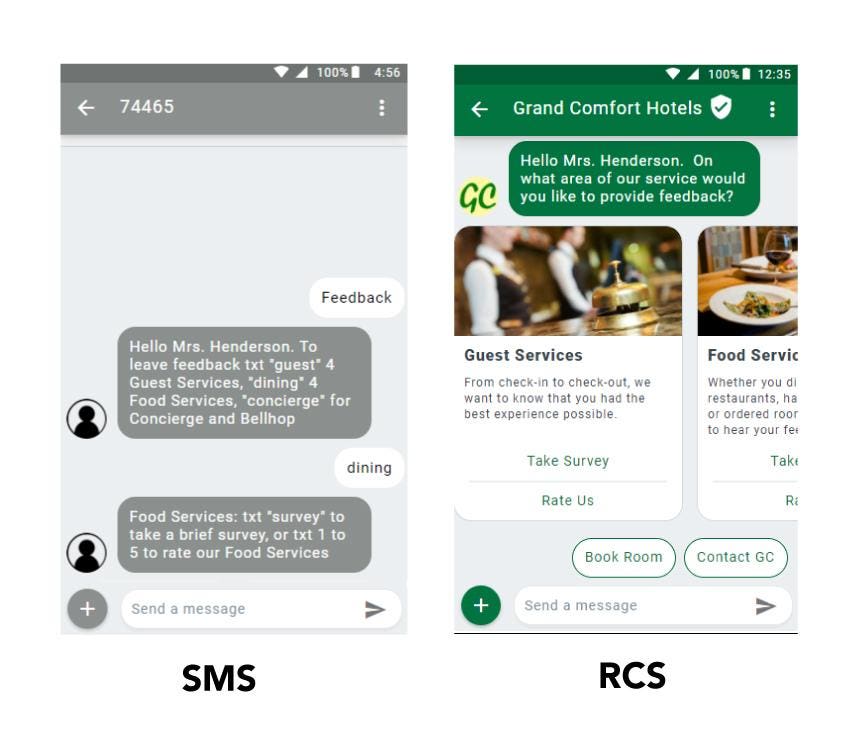 Side by side mock up of the visual differences between SMS and RCS courtesy of OpenMarket.

According to Greg Hoy, Director of Product Management, RCS Messaging at OpenMarket, there are three specific reasons that consumers will find RCS better than SMS. “First are the use of ‘chip lists,’ which make even complex engagements as easy as tapping a button. Second is the utility of having more functionality in the native messaging inbox that consumers already use so much. Third, message branding and verified sender information provided consumers with increased peace of mind and feeling of security when they receive RCS messages from trusted brands.”

Nearly 90% of marketers surveyed for the report were excited about using RCS if being able to incorporate a branded text experience meant they would have better conversations and engagement levels with customers. And, Hoy noted specific benefits for companies. “Brands will also be excited about the data they can retrieve from RCS engagements which will help them close the loop on the customer journey.”