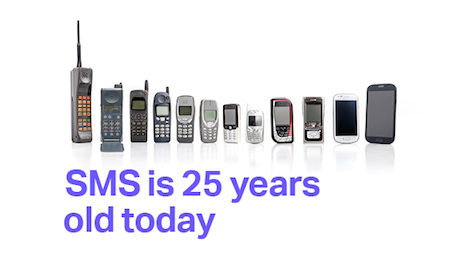 With so many ways to interact today, it might be surprising that SMS holds the title as the most successful communications channel of all time.

The simple, traditional text is responsible for connecting billions of people worldwide. As we celebrate its 25th birthday this month, it is fun to think back on its origins and the developments that have shaped its phenomenal success to-date.

While you may not remember what your first text message said, the gray screen, blocky text, T9 typing and Nokia phone surely hold a nostalgic place in your memory. Now let us take a look at its personal history.

From presidents to philanthropists, the text message has helped deliver everything from the most simplistic note to the most critical bits of information to people around the globe. Its efficient and effective means of communication has transformed both work and social lives, and can even boast to saving some of them.

SMS’ roots can be traced as far back to 1984, when Friedhelm Hillebrand and Bernard Ghillebaert from the GSM Corporation first developed the concept of sending a short message – hence SMS, the short message service – to and from a mobile device. It was not until 1992, however, when the first text was successfully sent and received. As a result, this is when it is most appropriate to say SMS was truly born.

1992: SMS is born
It was the year most popular for Bill Clinton being elected president and Right Said Fred’s “I’m Too Sexy” hitting the charts at number one. But 1992 was also the year that can officially claim the first text message was sent – from Neil Papworth to Richard Jarvis of United Kingdom-based wireless carrier Vodafone.

While it went down in the history books as a landmark moment for global communications, it was far from the finished product we know it as today.

Neil sent the text message from a PC, and Richard was unable to reply because his Orbitel 901 mobile phone did not even have a keypad. Due to the network constraints of the time, messages had to fit within a 128-byte limit (the standard defined in the 1980s under the Global System for Mobile Communications – GSM) and no GSM mobile phones of that time supported SMS.

Despite its challenges, the basic principle of text had been nailed and, in fact, remains much the same today. Its influence has even spread to social media – Twitter’s 160-character limit comes from its text messaging foundations (20 characters for the username and 140 characters for the tweet). And wireless carriers soon saw the business potential.

1993: SMS goes commercial
The following year brought about business interest in SMS. Unfortunately, like the first text the year prior, in 1993 there were still no devices that supported peer-to-peer (P2P) texting. The solution came from Finnish cell phone behemoth Nokia, which released the first handset that enabled users to send and receive text messages from its 1011 model. From that release forward, the world was changed forever.

1993 does not just have the beginning of commercial text messaging under its belt. It was also the year responsible for IBM’s introduction of the first “smartphone,” which went on sale to the public one year later in 1994. This was close to 15 years before Apple’s first iPhone, which today is known as a crucial moment in the history of computing and communications.

Despite this quick momentum up front, for the next few years, SMS struggled to capture people’s imaginations, especially in the United States.

1995: More firms begin getting behind SMS
While it had experienced some commercial appeal, consumers initially did not embrace SMS, as its advantages were not as obvious. This lack of adoption was directly responsible for uptake in the early days being slow.

By 1995, the average mobile phone user in the U.S. sent less than one text a month –a stat hard to imagine in 2017, with 72 percent of millennials sending 10 or more texts per day.

Although slower than initially imagined, things were happening for SMS. In 1995, Cliff Kushler of Tegic invented the T9 system for writing text messages on a numerical keypad, using keypad numbers 1-9 to type individual letters. The system caught on and was quickly adopted by Nokia, Ericsson, Sagem and many others.

1997: QWERTY comes to mobile
Two years after T9, Nokia was once again reigning king of mobile disruption thanks to its release of a full physical “qwerty” keyboard on a mobile phone, known as the 9000i Communicator. It paved the way for the phenomenal success of the BlackBerry phone that launched in 2002, and set in motion the way we text on smartphones today.

Not too long after, wireless carriers were hailing SMS as a quicker alternative to voice calls.

1999: SMS picks up the pace
In 1999, Prince was not the only one having a party. It was also the year when SMS really took off, and wireless carriers turned a simple messaging platform into a billion-dollar global industry. It is no coincidence that this was also the year that carriers started to allow users to send texts to people on different carrier networks.

Texting became so popular it sparked its own language. Txtspk made it quicker to text, and meant users could fit more words into the character limit: a gr8 success 4 customers. As a result, the average number of text messages sent in the U.S. reached 35 per person every month. And at $0.10 a text, it was Christmas come early for wireless carriers.

2007: SMS is the most successful communication platform of all time
2007 was a landmark year for SMS, and mobile phones, in general. Not only did Apple release the first iPhone that effectively propelled smartphones into the mainstream–but also more texts were sent than calls were made from mobile phones.

This, too, was the year that the next evolution of SMS, Rich Communication Services (RCS), first saw the light of day. Like the progressive path of SMS, RCS was first introduced with a very bright future ahead of it, but not fully conceptualized and ready for market a decade ago.

And despite rapid developments in smartphone technology, and exciting new applications beginning to crowd people’s home screens, SMS remained the number one form of mobile communication.

2011: Smartphones are in full swing, but SMS remains dominant
Smartphones had quickly taken people away from numerical and physical QWERTY keyboards, and sent them towards virtual versions with the capability to type on the mobile screen.

In 2011, the tide changed once again with the introduction of Swype which sped up the process of texting once again, allowing people to simply glide their fingers across a virtual keyboard to text.

As texting became quicker and easier, more people started using it as their go-to method of communication with not only friends and family, but with preferred businesses as well.

Today: 5 billion people and counting
With the rise of instant messaging services such as WhatsApp, iMessage and Facebook Messenger, many industry experts have questioned the longevity of SMS.

However, unlike other communication platforms, SMS has a strong loyal foothold among users, with 5 billion people globally still preferring the channel. If this user preference is any indication, SMS is here to stay.

Along with carving its own name in global communication, SMS has also successfully paved the way for revolutionary new services such as RCS, which sends information-rich, interactive messages with app-like capabilities.

As for its next 25 years? SMS is still proving its worth to brands looking to improve their customer experience. It remains an ideal platform to delight customers with empathetic moments by delivering useful, relevant information to the right place and at the right time.

While new forms of communication come and go, after 25 years, SMS remains the most successful communications platform of all time.

As text heads into its 25th year, its future looks brighter than ever. 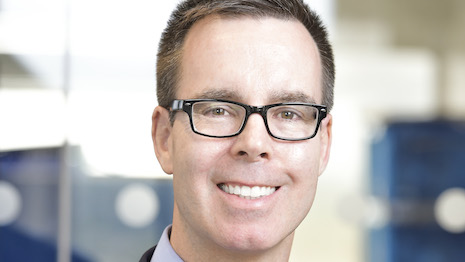 Steve French is global vice president of product management and marketing at OpenMarket, Seattle. Reach him at steve.french@openmarket.com.