When you are a tester and you are working on a brand-new project, I think we all like the idea of creating a fully automated test framework which can save us time in the future that we could use on learning new things, continue working in other requirements/stories or just on getting more coffee.

But in the real life we cannot always get rid of the manual test cases and besides that, creating automated test cases for a brand-new project following agile methodology, can be sometimes a little overwhelming because the effort required to develop all the required test scripts is huge besides of the constant changes during every sprint and the manual test that still required to check the code stability.

Sometimes when you think you are done with one script, there is suddenly a new story in which the user needs a new field and this single field means to modify several test / test scripts.

My team and I are currently working on a constantly evolving brand-new project using agile methodology, so we had the necessity to create  automated test scripts from scratch. We also wanted to find a better way to design them in a manner that if there are changes in the user stories,it doesn’t mean a full reworked of the test scripts we already have.

So how are we using the Data-Driven Test design work? Basically, we have our test data file, which is used as input for our test script. The test script runs all the actions/steps specified in the code using a piece of data from our data input file (it can be a row or a payload). Then it gets the actual result and compares it with the expected result. Once the comparison is done then it continues with the following data input from the file (row/payload). 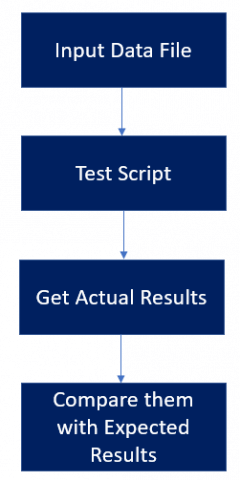 Some of the advantages we have found by following this pattern are:

Some general recommendations when creating our data file that have worked for us:

Currently in our project we are creating test scripts for:

So, I already mention some of the advantages  found following Data-Driven Test design.

Is there any disadvantage from my point of view? Yes, when you have a field that is an array you must specify it in your data file and your array length will always be the same. Also creating the data file is not always the activity I enjoy the most specially in a CSV file, because since you are having all the test scenarios in files it is one of the more time consuming activities when you are creating your scripts, the good news about it is that you only have to create the whole file one time and most of the times if any modification is required it is a minor modification.

Is there any way to mitigate this? Yes, we are trying to mitigate this by creating a test script which will create the test data for us and will solve the array issue too. We are not quite there yet, but hopefully we will make it work, and the time we spend creating tests will reduce and our entire process will be more efficient.

Taking into consideration all pros and cons mentioned above: Data-Driven Testing was a good choice for our use case, we were able to move forward faster and made our lives easier. One of the perks of DDT is that, once module has been fully automated, adding more test cases is just a matter of adding test data, very minimal changes are required for test scripts code 90% of the time.

So what’s next for us? We are working on creating a script which will help us to create the test data we need, instead of creating the data manually.

If you use mobile messaging to communicate with customers and employees in the US, here’s some important news. You can now send and receive MMS…