Does Santa Really Use OpenMarket? 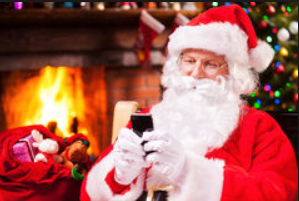 It’s that time of year when people are wondering – is it true? At the Christmas parties, folks have been coming up and asking again, and so this year I thought it best if I address these rumours head on.

I think without doubt we can all agree that Santa’s annual operation is quite without precedent. Be it total packages dispatched, peak rate of delivery or sheer geographic reach;  Santa and his Elves certainly have their work cut out. And Santa, like many of OpenMarket’s customers, won’t tolerate any mistakes. It has to work right first time, every time.

Mobile engagement has really transformed his operation in recent years. Let’s just take a typical day during the extended preparation phase. Santa’s out at the shops, the Elves are out the back wrapping, and an online delivery arrives. That text message letting him know the truck is there, and giving him the option to reschedule to the next day by sending a reply, has really become a lifesaver.

The back-end workflow coordination around which presents to buy; triage, consolidation by present type, and rostering for the Elves; that can all be done now via mobile engagement. They receive a text each morning telling them the priorities for the day, and regular updates via mobile messaging during the day, so that they can jump into problem areas as they arise. During the operation itself, weather and critical navigation information can be relayed in real time to Santa, and because it arrives via the mobile phone, it’s always within easy reach. Returns is an area for Santa many overlook, but should an issue arise with a present whilst in flight, Santa can also notify the distribution centre and have a replacement sent out to the next scheduled pick up point. The children never know.

Costs are never far from your mind when you are running an operation on this scale, and now for the Elves, notifications around timesheets, paychecks, changes to home addresses, and annual tax statement queries can all be handled from the phone. It’s better for the Elves and it’s cheaper for Santa to operate. Lastly, being the proprietor of a major enterprise, health and safety is of course Santa’s primary concern. Using an EMS  – Emergency Management System – means the Elves can be kept updated of any incidents and respond if they need help directly from their phones.

All in all it’s very impressive. It’s surprising the scale of process automation and transformation that can be achieved using mobile messaging. As to the original question – as a father with two children under the age of five, that might be part of the magic of Christmas that should live on. For anyone else who has a similar operation they wish to mobilize, please do get in touch and we’d be delighted to show you what we can do.